We take an in-depth look into answering the question of where does pink Himalayan salt come from. Himalayan salt has long been known for its properties that can help heal numerous ailments. However, where does the salt come from? The name suggests it comes from the Himalayas, and it is regularly purchased in the form of salt lamps and inhalers. However, the actual origins are rarely mentioned on the products.

Pakistan is home to most of the salt mines

Most of the salt products sold on the market are done so with images of the Himalayan Mountains. This leads many people to believe that the salt actually comes from somewhere on the mountain.

This is not accurate. So where does pink Himalayan Salt come from? Well, Pakistan is home to the majority of salt mines.

The people of Pakistan are proud of the fact they mine such a unique product. So much so that legislation is poised to be passed that will trademark pink Himalayan salt as Pakistani.

This issue has recently been raised in parliament in Pakistan.

Where pink Himalayan salt is mined

Pure Himalayan salt is taken from hills that are in marshes in Khewra in Pakistan, just a couple of hours from Islamabad.

These hills are called the salt range and they are tendrils of the Himalayas, albeit distant ones. They are what is left of a lagoon dating back 600 million years.

What was once a small time industry that was unknown now exports 400,000 tons of salt per year. The majority of salt is exported as crude rock with around a quarter of exports going to India at a cost of around $40 per ton.

The news that Himalayan salt was being transported to India for such a low price, processed and then sold as products at mark-up caused outrage on Pakistani Twitter.

People began to protest to stop the cheap export to the country, a country that did not even credit Pakistan as being the country of origin.

Quickly hashtags #salt cheap export to India went round in protest to the fact that miners of the pink gold were getting paid peanuts while India was getting all the credit.

Pakistan only earns about $26 million from exporting the salt. Now the leader of the senate is advocating discouraging salt sales along with encouraging production of finished products in Pakistan.

A single Himalayan salt product, the Zen Cube, is sold in the US for more than $16. This is almost half the amount that companies in Pakistan are paid for half a ton of crude salt.

So, the next time you light your Himalayan salt lamp or inhale the salt air through your salt inhaler remember locals in Pakistan have mined the salt by hand. A tradition they have used for thousands of years.

Where does pink Himalayan salt come from? It comes from Pakistan and don’t forget it. 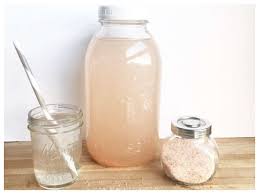 Gargling with Himalayan Salt Could Fight Off Coronavirus